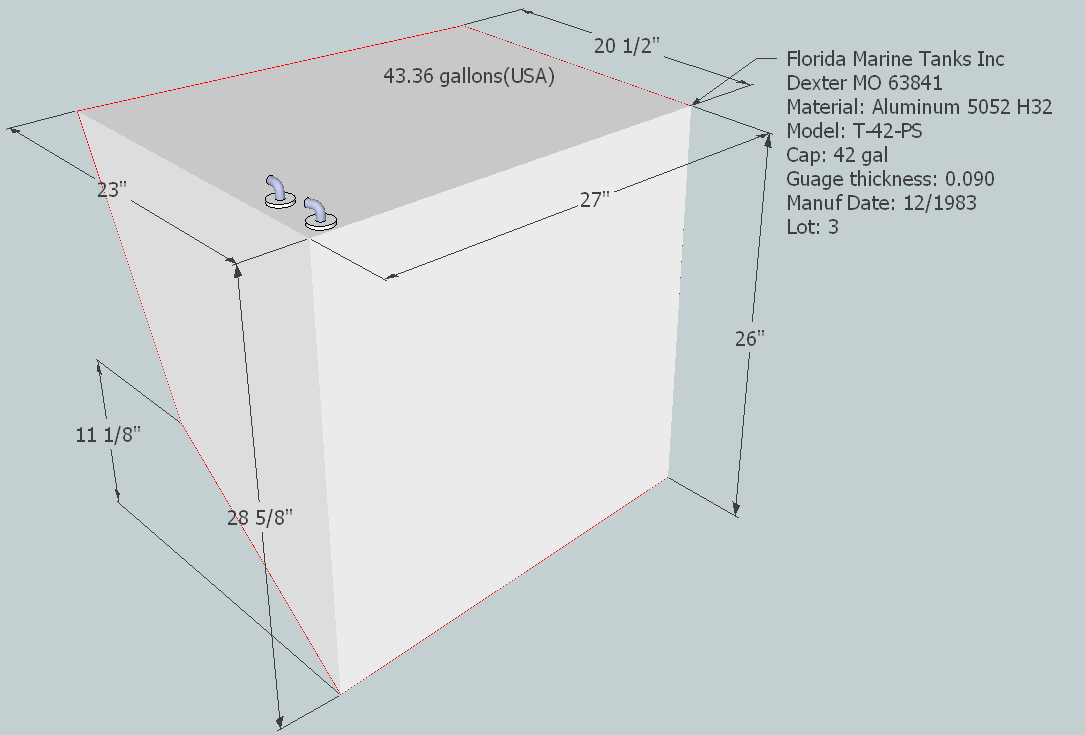 The original diesel fuel tank on our boat has been in place since it was installed in 1984, and nobody had looked inside that tank since then.  How do I know that?? Because there was no inspection port in the tank!  We knew we had to do an inspection of the tank before we took off (and we had a strong suspicion that there could be some unpleasantness inside), and in addition we have future plans for adding additional fuel storage, so we needed to do some new plumbing for this tank in any event.

So, the first project was actually opening up the cabinetry above the tank.  That in itself was a day of screwing around.  It is always a little struggle deciding how exactly to remove cabinetry pieces without inflicting major damage.  In the end, I did do a little molding cutting that was not really necessary, but the cosmetic damage was not too great. 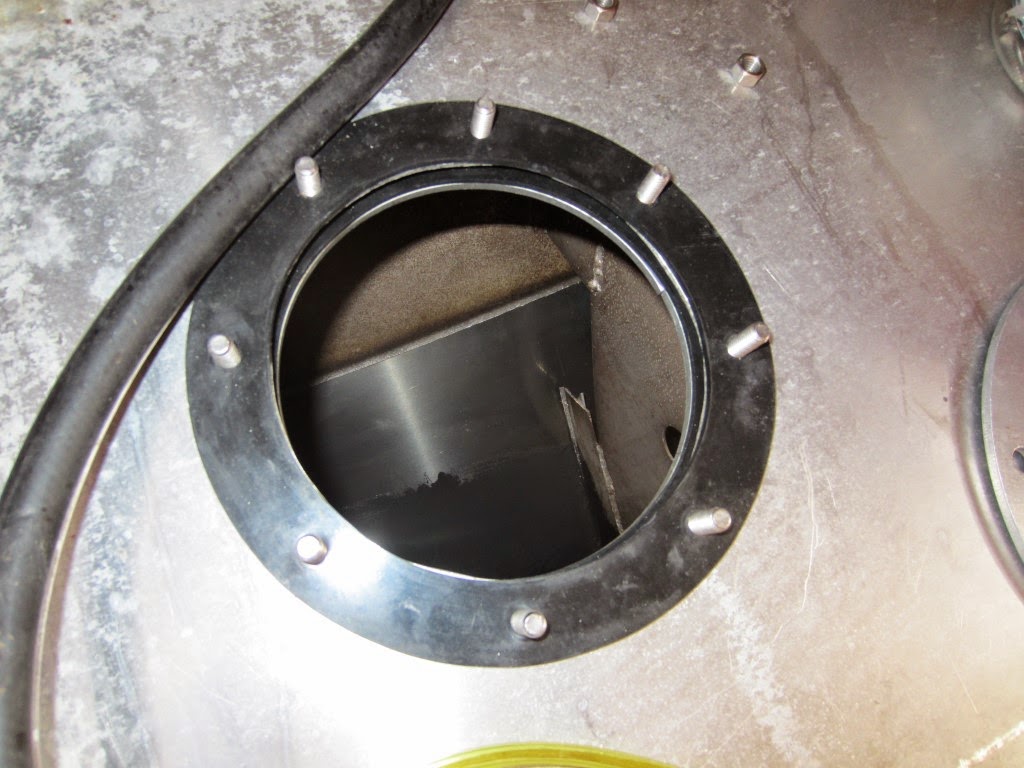 After getting access to the tank, I cut a nice 6" circular hole in the top with a sabre saw, for installation of an inspection port.  (BTW, the inspection ports from Seabuilt NW are really great.)  Then I could see about two inches of slimey muck in the bottom of the tank! 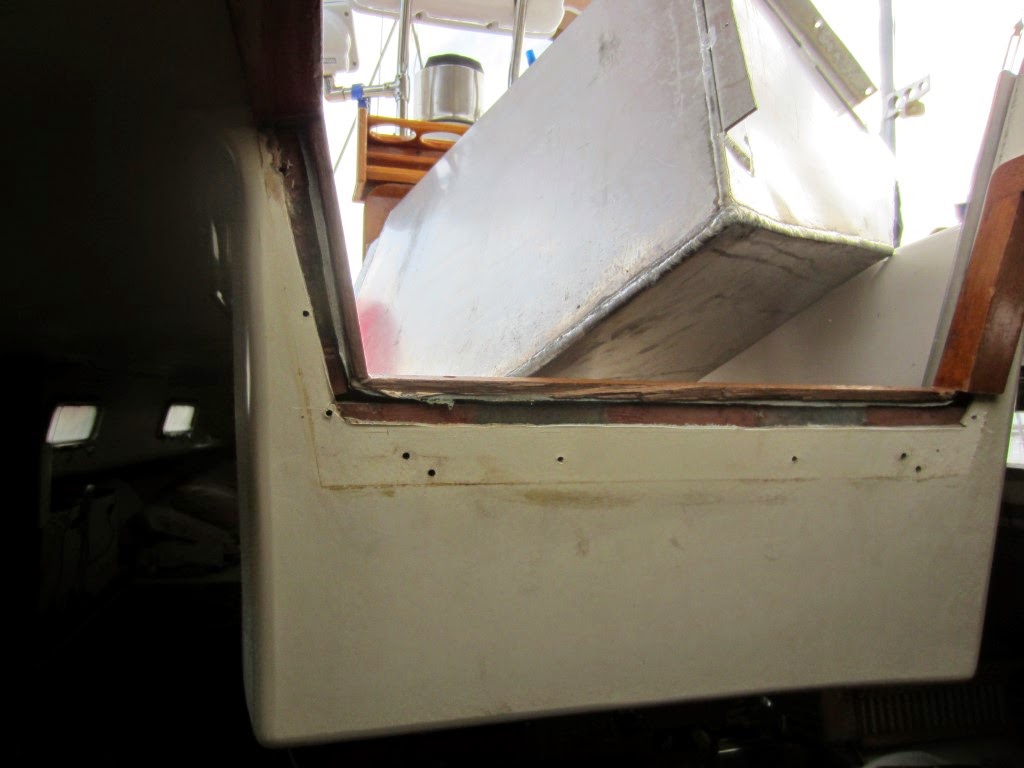 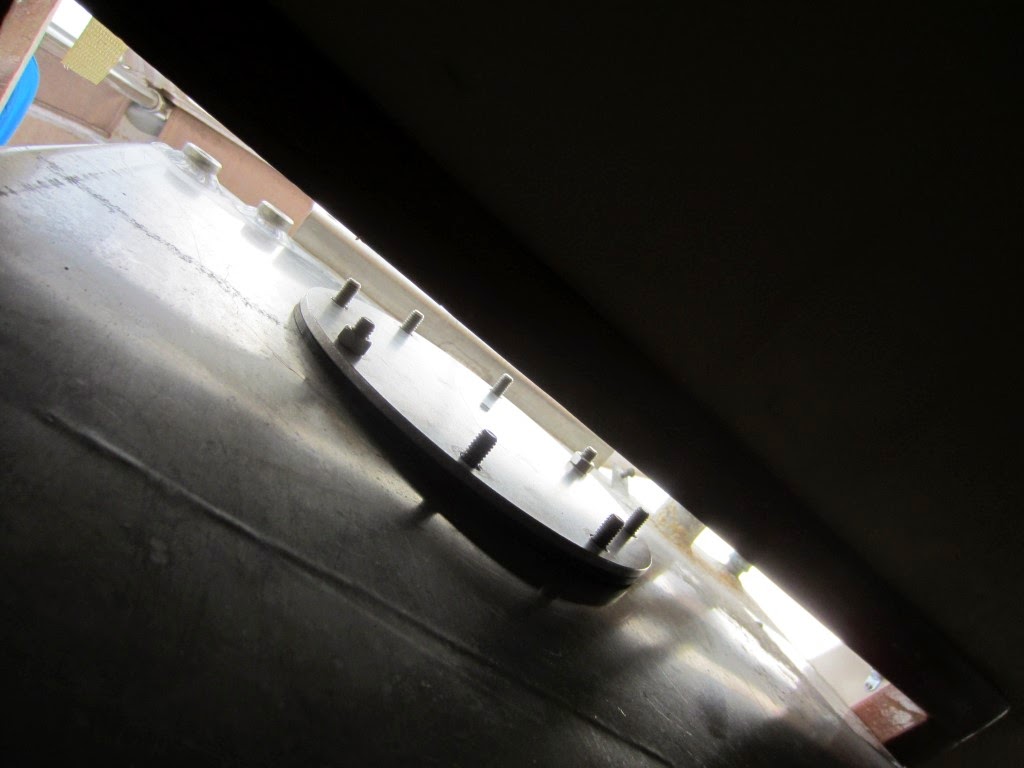 The next major hassle was getting the tank out of the boat.  We removed the companionway ladder, and Jolanda was up in the cockpit helping as I tried to guide the tank through the companionway hatch.  I tried it in all possible orientations, but I simply couldn't find a way to get this thing through the opening!  It seemed so close.  In a bit of desperation, I stared removing molding pieces.  As you can see in the picture here, I removed the lower horizontal and one of  the vertical molding pieces around the companionway opening.  After doing that, the tank just barely squeezed through ... like with a 1 cm clearance.   I swear that the Pearson designer must have either designed the companionway hatch to accommodate the tank, or designed the tank to fit through that hatch!

NOTE: For any other Pearson 385 owner,   the orientation that worked for me: put the end with the fill tube out first, with the fill tube pointed forward and on the port side; as you raise the tank, you will be able to just barely get the lower corner to slide through.  As you can see, there is just a little clearance in the front (this is a photo from inside the boat, looking up). There may be some benefit in removing the handle from the hatch, since that allows you to push the hatch another inch or two forward.


With the tank out, I first took it to a local metal work shop (Svendsen's in Alameda).  I asked them to weld close the lower drain port.  In my opinion, it is a bad idea to have a drain port at the bottom of a fuel tank -- if there is leak in a fitting down there, the fuel will leak out into the bilge and create lots of new problems.  Better is to remove the fuel via a pickup tube installed from above.  [There is some argument to be made that having a drain at the bottom will prevent the accumulation of crap in the bottom of the tank, and instead the crap will come out to be caught by the fuel filter.  That might be true ... but in our case, the tank still had a bunch of crap in it that was never coming out! ].  So I also asked Svendsen's to install two fuel pickup tubes; one goes almost to the very bottom of the tank, in the lower left front corner; while the other ends about three inches above the bottom corner.  My plan was to use the upper pickup tube for the normal fuel pickup; this would prevent most crap to just remain in the bottom and not get sucked into the fuel system.  The other pickup tube will be used for: 1) the tank level monitoring, using my groovy air-pressure tank monitoring system; 2) a way to allow us to pull the accumulated crap out of the tank when we decide we want to; 3) an emergency fuel pick up, if we are running so low on fuel that we need to get the last couple of gallons out.

After Svendsen's was done, I took the tank to a professional tank cleaning guy, Nathan over at Marine Lube in Alameda.  They use steam cleaning to clean the thing.  The only problem was that while cleaning the thing, Nathan noticed that water was coming out of the bottom!!  It turned out that the bottom weld was cracked somewhere.  Maybe it happened while Svendsen's was welding the thing; maybe it happened while Nathan was cleaning it; or maybe it had been cracked for quite a long time, but had not yet leaked simply because it was plugged up with crud!  Anyway, after finishing the cleaning, Nathan took the tank two doors down to a welder named Mario.  Mario repaired the welded seam, and pressure tested the tank.  So I thought  "Great ... at least that was not too bad."

Before I reinstalled the tank, I decided I wanted to coat the inside of the tank with a sealant.  Nathan, the cleaner, had also noticed some pitting in the aluminum sheet on the lower sloping surface.  In preparation for applying that sealant, I was doing some additional cleaning of the inside.  I noticed those pits also... and some of them were pretty serious!  I wasn't sure about the depth, but some of them seemed like they was about to come all the way through pretty soon!  So, I called up the welder Mario, and he said he could cut out that lower plate section and replace it with a new piece of aluminum.  He gave the old piece back to me -- I measured some of those pits, and they were about 0.050 to 0.060, with the sheet being 0.090 thick.  So, they were more than half the way through.  Probably with the tank coating, they would not have progressed, but it feels much better not having to worry about that. 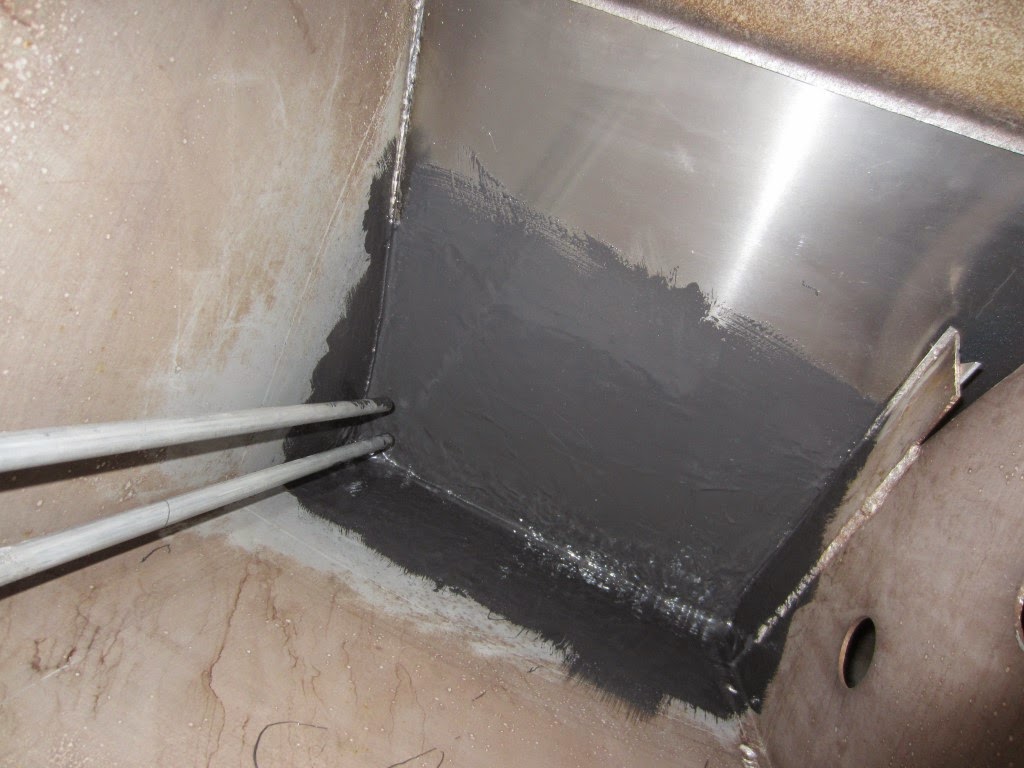 So, finally after a lot of screwing around, I was able to coat the inside of the tank with a sealant.  After reading a lot of suggestions on sailing forums, I came to conclusion that the best stuff out there is designed for the aircraft industry.  I got some good stuff from Aircraft Spruce made by 3M called AC-236. It is relatively thick, but can be applied by paintbrush.  After curing, this leaves a slightly tacky, resilient coating.  Since I installed my inspection port only on the left side of the tank, I was only able to apply the sealant on the left side -- the baffle in the middle of the tank prevented access to the other side.  This picture shows the sealant, applied to the lower sections.  I was really only interested in coating the lower section -- and especially the sloping section -- since that is where the worst pitting had been present. I think that is simply due to the fact the biologic scum can probably hang on to the sloping area more readily than the vertical surfaces, even as the fuel/water interface moves up and down over time. 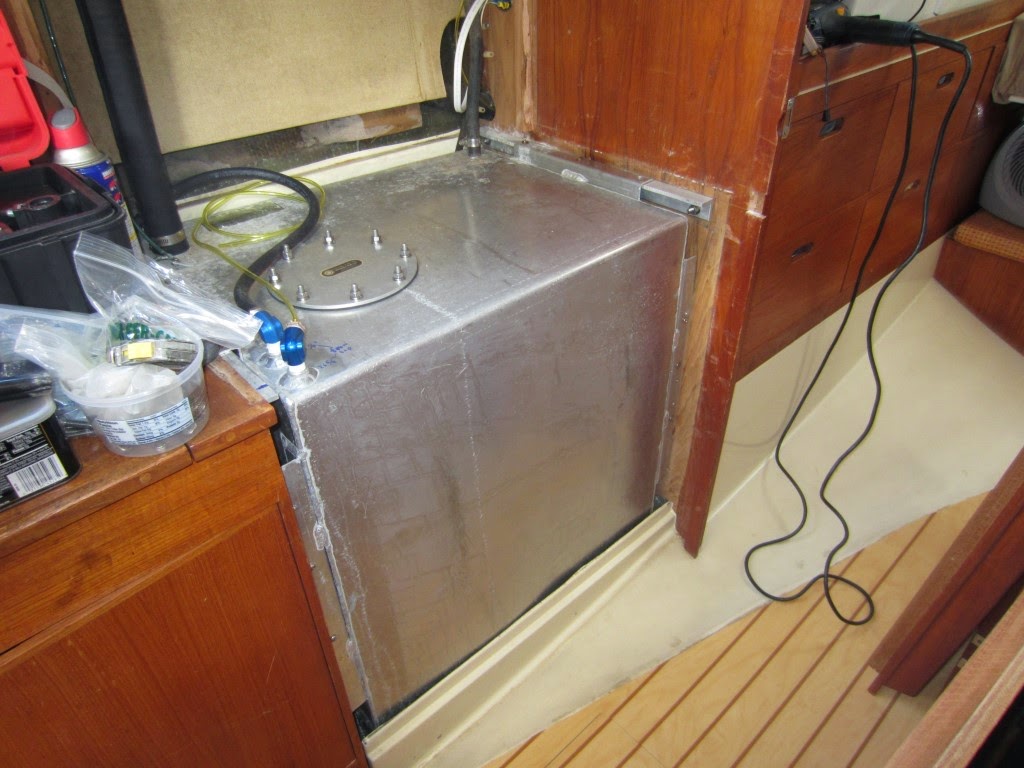 So here is the reinstalled tank.  The fittings I used on the pickup tubes are anodized aluminum fittings, to eliminate the problems with dissimilar metals.  A small problem is that new fittings protrude higher above the tank than the covering table-shelf allows, so I had to cut a small section out of that area of the shelf.  I eventually plan to cover that area with a small plastic cover. 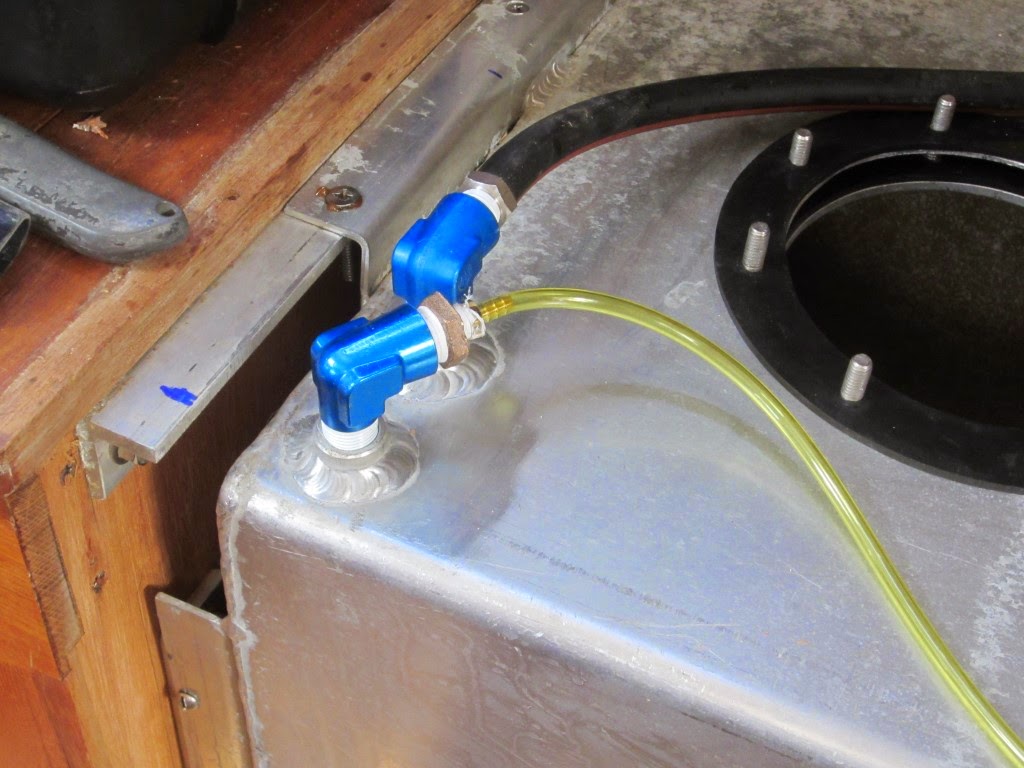 The small yellow tube is for the air-pressure tank monitoring system.  More about that in another post.

If anyone is interested, here is a Sketchup model of the fuel tank.